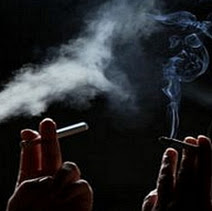 Everybody knows that traditional cigarette products bad smell and odor to your surrounding. Traditional cigarette’s scent not only clings to you but also to others’ hair and clothes. Sometimes people around you can realize that you are smoking without even looking at you because of the odor. Traditional cigarette smoke smells bad due to the burned tobacco, tar & chemicals within it. E-cigs on the other hand do not have this kind of odor. Instead of exhaling smokes, using e-cigs lets you exhale a vapor that evaporates almost immediately. People around you might smell cotton candy like-odor instead!

Just take a look at it in a single perspective – tax. Just count by yourself how many times tax for tobacco has been increased? This situation is not happen to e-cigs. Besides that, traditional cigarettes cost you a lot of money per month. Just calculate a price for a pack of cigarette and multiply it with the number of packs that you bought last month – you will realize that it is a lot of money which you can save. This amount is excluding lighters and ash trays! Now try to compare the amount with a starter kit of e-cigs and the liquids that you might need per month. You will find that e-cigs can save you a lot of your expenses compared to traditional cigarettes.

Do you know that 10% of fire-related deaths worldwide are caused by lit cigarettes?

Yes – some people claim that there is no pure evidence that e-cigs are healthier than traditional cigarettes, but a fact that we cannot deny is traditional cigarette is harmful to your health. Cancer, heart attack & throat cancer – are some of the effects of smoking cigarettes. In fact a lot of e-cigs usershave reported that they feel physically active after switching to e-cigs.

The next benefit of e-cigs over traditional cigarette is you can use it anywhere. It is a known policy worldwide that you are restricted to smoke in official and working places. This is due to the nature of traditional cigarette which smells bad for the surrounding area. E-cig can let you vape within buildings and even rooms!

If you have switched to e-cig, congratulations. If not, it is time to take a look into a better choice. Compare e-cigarettes with traditional cigarettes and make your decision. on An educated decision is the best decision that you can do in your life so before you opt for any product, read and compare the choices first.