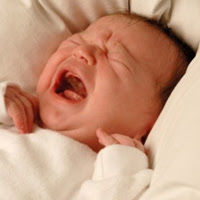 Study of 43 infants shows less crying and more sleep: A study was conducted by doctors at the Anglo-European College of Chiropractic in the United Kingdom to determine if chiropractic care had any benefit for colicky infants.

Colic is generally defined as persistent crying, not likely to be soothed by a caring parent, mainly occurring in late afternoon and evening in infants who are well fed and healthy.

Colic is a condition with no known treatment protocols that have proven to be entirely effective. There has been little study on the benefits of chiropractic care for colic and this study represents an interesting approach that parents with colicky babies may want to try.
Researchers established criteria for inclusion in the study: infants less than eight weeks old who cried more than three hours for at least four of the previous seven days. The study group was eventually set at 43 children.

Two methods of chiropractic care were used, both very gentle, non-invasive procedures. Spinal manipulative therapy (SMT) was used on 22 of the infants, and occipito-sacral decompression (OSD) on the other 21, all selected at random for each particular care methodology.

A properly functioning nervous system is just as important in infants as it is in adults. All adult patients should consider bringing their children in to a family chiropractor to get checked out. Stress and other imbalances have an overall effect on our spinal column and the chiropractic profession refers this stress as subluxation. It’s important to seek out a chiropractic practice that features the Insight Subluxation Station, a technology used by NASA in the space program, to measure nervous system health and performance.

Studies like these give insight into new ways to approach age-old problems of health, but such studies are just a first step toward further understanding health issues like colic.

Reference:
“Comparison of the short-term effects of chiropractic spinal manipulation and occipito-sacral decompression in the treatment of infant colic: A single-blinded, randomized, comparison Trial,” by Maria Browning and Joyce Miller, Clinical Chiropractic (2008) 11, 122-129.

Dr. Greg Haitz first became interested in health and wellness at a young age. He would often find himself reading food labels and nutritional facts. As a teenager he started studying exercise and nutrition and weight training. These early interests persisted and he found himself pursuing college studies in biology, psychology and exercise at Mesa State College. After a car accident left him with daily headaches, he sought out a natural approach to the problem. That seeking landed him in a chiropractor’s office where he not only found a permanent and natural fix to his daily headaches, but also a future carrier. Dr Greg Haitz finished his studies at Mesa State and was accepted into the prestigious Palmer College of Chiropractic in Iowa where he graduated with his Doctor of Chiropractic degree in 2003. He also completed an internship in the Palmer College Sports Injury and Rehab department. Since that time he has received post graduate training in nutrition, and received his Certified Strength and Conditioning Specialist designation from the NSCA.
0 comments… add one