Thinking of Going Under the Knife? 5 Popular Procedures 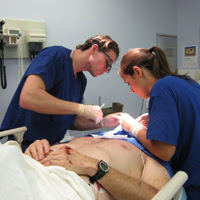 Plastic, or cosmetic, surgery is more popular than ever today. Over eight million people have had some kind of procedure performed, from surgeries to minimally invasive procedures.

Liposuction is by far the most commonly performed cosmetic procedure in America. The procedure involves placing a tube underneath the skin and sucking out fat deposits that are stored there. Close to 90 percent of the patients receiving liposuction are women. For just over $2,000, patients can have their thighs reshaped, their buttocks flattened or their muffin-tops vacuumed away.

Close to a thousand women have their breasts augmented, or made larger, on a daily basis. Whether for cosmetic reasons or physical ones, breast augmentation is becoming increasingly popular. In fact, this is the most common procedure undergone by adult women in America. Breast augmentation can give women a more feminine shape and can provide women who have undergone a mastectomy a renewed sense of self-esteem. Though there are some surgeons who will make women’s breasts as large as the women desire, most suggest to stay within a normal cup size range for a natural look.

As people age, it’s not uncommon for the eyelids to begin to droop. For many people, this is merely a cosmetic inconvenience but for others, drooping eyelids can inhibit vision to a point that it becomes a physical problem. No matter the reason, over 200,000 people have had their eyelids lifted for under $3,000. An eyelid surgery can give people a more youthful appearance in just under ten days when you factor in recovery time.

Rounding out the list of the top five most commonly performed cosmetic procedures is the tummy tuck. During a tummy tuck, fat and skin is removed, abdominal muscles are tightened and the skin is sewn back together. Patients instantly lose their beer bellies or post-baby sagging. Over 90 percent of patients who undergo this surgery are women and are rewarded by a flat, tight stomach after about six weeks of recovery time.

Plastic surgery is becoming increasingly common as people strive to retain a youthful appearance for as long as possible. Remember, though, that no amount of surgery will make you happy with yourself if you’ve got poor self-esteem. Cosmetic surgery is only advised if you want to turn yourself into a better version of the fantastic person that you already are.

Credit to Neeta Lind for the image.

Morgan Lindman writes for health and beauty blogs and recommends checking out Dr. Buford for your procedure.
0 comments… add one