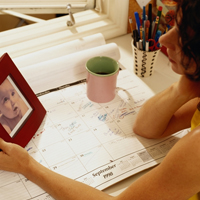 Women who are trying to get pregnant will significantly increase their chances if they are aware when they are ovulating.

Knowledge is power, and if you are hoping from a visit from the stork, your ovulation date is the single most important piece of information you can obtain. The question is, how? There are several ways of determining when you ovulate. Two commonly used methods are ovulation calendars in combination with ovulation tests that react to hormones in urine, and charting to conceive using basal body temperature. How do these two methods compare?

An ovulation calendar is a simple, low-tech tool that calculates the date a woman is most likely to ovulate. This is done on the basis of information you provide. For the ovulation calendar to work most accurately, it helps if you know not only the date of your last menstruation and the average length of your cycle, but also the number of days your luteal phase (the time between ovulation and the next period) usually lasts for.

Ovulation calendars are handy, because they make a calculation of when an egg is most likely to be released from your one of your ovaries. They are often accurate, but because not every woman ovulates on the same cycle day – and not every woman’s ovulation occurs at the same time in her cycle every month – they don’t always offer you the whole picture.

And that is, of course, where ovulation tests come in. If you start testing every afternoon a couple of days before your ovulation calendar tells you you will be fertile, ovulation tests should catch your exact ovulation date. The “rules for success” are simple for couples using this method; have intercourse regularly (not necessarily every day) starting from five days before ovulation and commence testing at the same time. Once you get a positive test, have sex again.

Fertility charting, also known as natural family planning, is a method that relies on a woman taking her temperature at the same time each day. It can be used to conceive faster, or to avoid pregnancy. In either case, the results are most accurate after a long period of inactivity. That is why most women measure their temperature very early in the morning, before they get up.

Why is your temperature so important? Women who are charting to conceive aim to pinpoint their ovulation, and body temperature tends to spike rapidly during that time. If your temperature suddenly goes up by quarter to half a degree Celsius or half to a whole degree Fahrenheit, you are probably ovulating.

Women who use this technique report accurately finding out when they are ovulating. After a few cycles, they will probably know when to expect ovulation as well, meaning they can plan some “baby-making time” in advance, just like those using an ovulation calendar and tests. Online fertility charting services make the process more simple, and both methods can be used successfully to speed up conception.

The only drawback of charting to conceive vs an ovulation calendar combined with ovulation tests is that you will probably conclude you have to set your alarm clock really early in the morning to take your temperature, and then go back to sleep for a while. Personally, I like my sleep and don’t want to do this. But then, early morning disturbances might be good practice for when you have a newborn!