Play Wii to Improve Your Health 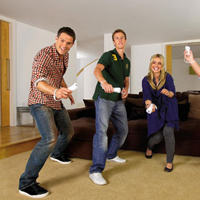 Unlike other game consoles where gamers sit on the couch while playing the game, Wii has digital sensors which allow the gamers to play the game virtually.

The player may have to stand in front of the TV and wave the controller based on the game for example bowling or tennis game. This feature involves the physical movement where makes the experience of the game becomes real and enjoyable.

Some studies also agree that:

Besides that, medical researchers also optimizing features from Wii to treat children who suffer from hemiplegic cerebral palsy, a condition that can partially paralyze one side of the body. Active video games can improve the motor function of a patient and this is the essence of the treatment using Wii.

Believe it or not, another healthy benefit of playing Wii is it helps people to lose weight. Based on a report by a well-established medicine journal, playing Wii can help people to fight obesity. By doing a lot of physical movements, people can burn three times as many calories compared to playing hand-held video games. There are even cases where people lost 9 pounds after 6 weeks where they play Wii games 30 minutes per day!

I play games. I love games. And I share about games. Take a look on my collection for gamers at Gamers’ Collection!
0 comments… add one