Lowering the Risk and Severity of Scarring after Surgery 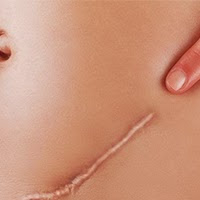 The fact that scars are a part of natural healing process of the body after a surgery, can best be seen in the fact that most of the procedures that one may go through, except some lesser ones, usually result in scars.

Although scars are completely natural, and in some cases also completely harmless phenomenon on your skin, sometimes this is not the case.

Some scars, can be pretty unsightly, and thus pose a serious blow to one’s self esteem. However, more serious are the cases in which they influence one’s natural process of healing or even impede one’s movement. There are numerous factors that can affect the development and appearance of scars as well as there are numerous things you can do about it.

Logically, the first and the most important factor in determining the intensity and visibility of the scared tissue is the nature and severity of the procedure itself. The larger the incision, your body needs more time to recover from it. Furthermore the bigger the area that it covers, the greater the chance is that any kind of movement is going to disturb it. The location of the scar is also quite important for its further development, since areas that are under constant strain like elbows or knees, are far more likely to worsen its conditions.

Amongst the other factors on which the density, intensity and visibility of your scar depend, there are genetic predispositions and age. If someone in your family has a genetic predisposition to serious scaring this could play a significant role on the development of your scar and this is definitely something that you should mention to your doctor prior to any surgery. As for the age, it is known that with age, skin loses its elasticity. Therefore, the older you are the more it will take for your scar to heal.

What can you do about your scar?

First of all, you should try to avoid any interference of the environment with your scar and try to avoid movement that could further employ the motion of the scared area. Most experts also suggest that consumption of large amounts of fluids, mostly consisting of green tea, natural juices, or even an occasional glass of wine but most of all fresh water helps greatly in scar recovery. In the efforts to heal your body in the most natural and at the same time efficient way, hydration is one of the most important things to keep in mind.

Try to clear your body of toxins by enjoying in fresh air, as much as possible and make sure to enjoy a lot of fresh fruit and vegetables in your diet as they are great natural antioxidants. However if this all doesn’t help you as much as you hoped it would, meaning that in the end you are still not satisfied with the way in which your body healed, perhaps it is time for you to visit a skin laser clinic. This way, you can significantly improve the condition, as well as the appearance of your scared tissue, with a simple, inexpensive and most importantly non-invasive procedure.

Scars are completely natural, and sometimes even necessary things. However, at some other times, they can pose a significant trouble for their bearers, both in aesthetical and practical field. Luckily, this problem has numerous solutions which mostly depend on your determination and willingness to do something about them. The choice is all yours.