The Consequences for Your Baby If You Smoke While Pregnancy 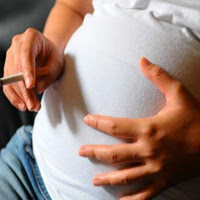 Smokers know the health risks especially during pregnancy. There are a number of problems including but not limited to adverse risks during and after pregnancy.

It’s unfortunate to note that many women won’t quit smoking as soon as they discover pregnancy. It’s important for both you and your baby to quit the benefits are worth it. Once you’ve made the decision to quit seek out a support group to help you succeed. Smoking during pregnancy poses some very real risks and we will talk about those risks here.

When you smoke, all of your systems are essentially attacked by the hundreds of chemicals that get added to cigarettes. Your baby will be more susceptible to colds and infections if you smoke because it compromises their immune system. The respiratory system also suffers from several complications due to smoking during pregnancy. The child may also have growth problems as a result of smoking as well.

One of the possibilities caused by smoking during pregnancy is a higher chance of your baby having a cleft palate, cleft lip, or both.

Both are considered birth defects and either one or both are more possible in your baby due to the mother smoking while pregnant. Specifically, a cleft in any tissue is a result of incomplete closing during development or growth before birth. As you know, the future effects on your child will be tremendous. There will be various speech problems as well as severe social stigma which will negatively impact your child.

Smoking while pregnant can have immediate, physical consequences on the baby and it’s natural to focus on that. Evidence is starting to show a correlation between smoking during pregnancy and behavioral problems in the child, however. This can mean the child has a learning disability or a general behavioral issue.

A woman who smokes during pregnancy should find this very troubling.

For the sake of both mother and child, it is vital to quit smoking during pregnancy.

Mommies – You Should Read This