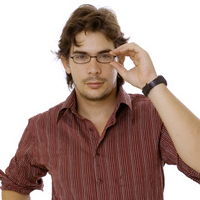 From the common to the rare and the severe to the benign, we look at 9 genetic disorders affecting men.

When looking at hereditary problems in men, it’s useful to understand the difference between single gene disorders and polygenic or “complex” genetic disorders. Polygenic disorders may include hereditary factors combined with lifestyle and environmental factors — such as heart disease or cancer. Single gene disorders, which you’ll read about in this article, are the direct result of a single, mutated gene. Some of these disorders are serious and difficult to treat, while some are merely inconvenient, such as male pattern baldness, which can be treated with a hair transplant.

Occurring primarily in African-Americans, Sickle Cell Disease results in the production of abnormal hemoglobin, which contributes to a severe type of anemia (a deficiency in red blood cells). The disease is particularly common in areas where Malaria is present — strangely enough, because those carrying the disease show milder symptoms when diagnosed with Malaria.

A hereditary disorder where the exocrine grands produce abnormally thick mucus, resulting in serious respiratory and digestive problems. It is one of the most serious genetic disorders and can often result in death.

Most commonly affecting males, hemophilia affects the body’s ability to control coagulation or “blood clotting”, resulting in excessive bleeding from even the slightest of injuries. While a hemophiliac won’t bleed more intensely than the average person, they will bleed for longer.

Otherwise known as Down’s Syndrome, it is the result of an abnormality in the 21st chromosome. People suffering from Down Syndrome can be recognized by their short stature and broad facial profile. While it significantly affects cognitive development, with the appropriate support many Down Syndrome sufferers are still able to graduate from school and join the work force.

Affecting males, it is the result of an extra X chromosome which results in a long, thin physique, enlarged breasts and small testes with reduced fertility. While sufferers are usually infertile, there have been many cases of successful pregnancies using IVF treatment with sperm from a Klinefelter’s sufferer.

A condition where intolerance to gluten leads to a failure to digest food properly. This can damage the small intestine and lead to diarrhea, bloatedness and weight loss. Generally, people with Coeliac should avoid breads, pasta, beer, muesli and other foods high in gluten content.

One of the most common life-threatening genetic diseases, it causes fluid-filled cysts to be formed on the kidneys. These cysts destroy working kidney tissue and may lead to kidney failure. The disease can also damage the liver, pancreas and, in rare cases, the heart and brain.

As the name would suggest, colour blindness results in an inability to perceive the difference between certain colours. It is more prevalent in males than females and is usually inherited, although it can be a result of environmental factors or eye, nerve or brain damage.

Androgenic alopecia, more commonly known as male or female pattern baldness, is a polygenetic disease. In the case of males, in which it is most common, it refers to the loss of hair on the front and centre of the scalp. The fact that it always occurs in the same areas is why it is known as “pattern” baldness. It should be distinguished from other types of hair loss which can be caused by lifestyle or environmental factors and may not be confined to the scalp; for example, eyebrow or body hair loss can occur as well. Treatments, such as hair transplants and eyebrow transplants, are available to treat all hair loss conditions.